This fall, when the Virginia Wadsworth Wirtz Center for the Performing Arts announced a celebration of the return to live performance after a 19-month hiatus, MA in Sound Arts and Industries Co-founder and Director Jacob Smith had an idea: In addition to highlighting upcoming shows and offering an inside look at the theatrical creative process, the MA in Sound Arts and Industries program could collaborate with the Department of Theatre to showcase sound installation.

He brought the concept back to Associate Professor of Instruction Stephan Moore, and the two brainstormed ways the program could contribute to the production. “Because I work with such an amazing group of students and alumni, I was able to get several people involved and hand off different parts to each of them,” explains Moore.

At the event, Moore chose to showcase First Object from Last Audience— a sound installation extracted from Last Audience, a performance created by collaborative group a canary torsi that he contributed to as sound designer and composer. First Object is a curious sculptural instrument made of metal; the audience is invited to play with implements like drumsticks, strings of beads, and cello bows. When someone interacts with the sculpture, the sound they create is repeated and shifted to strategically placed speakers. The more the audience creates, the more sound fills the room.

Last Audience was performed for the first time in 2019 in New York City and received awards for its soundtrack and overall production. During a typical year, it would have gone on tour so it could be experienced by audiences around the country. But—like so many things in 2020—it came to a halt with the pandemic.

“The opportunity to have this small part of Last Audience be in front of people again was really meaningful,” says Moore.

For the remaining sound work, he tapped into the talents of Adjunct Lecturer Russ Gillespie ’18, Libby Lussenhop ’22, and Regina Martinez ’21.

When Gillespie was asked to curate a program of ambisonic compositions, he knew he wanted to showcase the work of his students.

“People have had emotional responses to the situations unfolding over the last few years,” he explains. “Many students have gone into very internal, reflective, or meditative spaces with their work. As I was reviewing, I knew there were a few standout pieces I wanted to use. It was rewarding to find ways to be creative through curation and finding bits of magic by composing with other people’s compositions.”

The experience begins with sound work by Shawn Yee ’21. His intricate, detailed film/game sound took on a cinematic appeal that introduced audience members to the environment. “I actually cut up his piece and used it throughout the composition,” Gillespie explains. “To start, I used sound from the end, which reflects getting on a plane and preparing to take off. The engines start kicking up, and that sound washes out for a moment.”

From there, he weaved in work from Daniel Christain ’21, which focuses on talking the audience through meditation. “It’s chopped up and jumps around like your mind might do while you 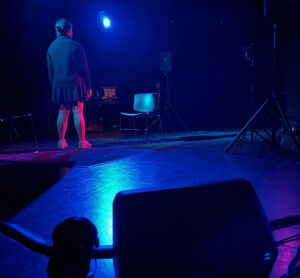 meditate, and it helps the audience slip into a contemplative space,” Gillespie explains.

To take the audience into more of an ethereal setting, the piece transitions into lush, rhythmic musical compositions created by Aaron Mix ’20, featuring a piano, guitars, and traditional African folk instruments.

It then fades into a recording of water sounds created by Daniel Hayashi ’20. The sound washes all around the audience members, making them feel as if they’re steps away from the lake while being inside an illuminated black box.

To bring attendees back to reality, the composition comes back to Yee’s piece using sounds of a thunderstorm as experienced from inside a taxicab. “As soon as the door opens, you hear rain washing all around and the trunk of the car being packed up. You’re able to very clearly imagine it,” says Gillespie. “Then you hear sounds of the storm fade as you approach the airport terminal, step into an elevator, and the doors whoosh shut.”

It concludes with work from Aaron Robinson ’21, which starts with a big wash of sound and takes audience members through a dark, space-type sequence. “It feels very modern dance,” says Gillespie. “It works really well as a final piece because it almost feels like it has elements of the other pieces in it. None of these students were working with each other but, because they were all creating around the same timeframe and inspired by a similar set of events, there’s a link. As you listen, you begin to hear internal resonance among the pieces.”

When Lussenhop accepted Moore’s invitation to participate, she knew it would be a step outside her comfort zone. Up to this point, she says that all her sound design work was intended for headphones in a controlled environment.

Because the purpose of the event was to celebrate the return of live theater, the directors wanted to highlight crowd noise in shared spaces—a sound that most people hadn’t experienced in over a year. It created a mood and set the stage of an opening night—even though only a few people were entering the space at a time.

“Until this experience, I didn’t realize how much the sound of people excitedly talking around you can make you feel like you’re a part of something really special,” explains Lussenhop. “Trying to replicate a sliver of that with sound has the capacity to create the feeling of being part of something big.”

For her, the greatest challenge was deciding how to account for what crowd noise might sound like in different areas of the theater space—from hallways to a two-story lobby with exposed ductwork and pipes. “In this case, it was less about the sound and more about the feeling,” she says. “Hopefully, it stirred a memory for people as they thought about what it feels like to walk into a busy place where something is happening—we’ve missed out on that for quite a long time.”

Even though she was going to be out of town during the event, Moore also invited Martinez to showcase a project during Open House. He knew her work well through a Digital Musical Instrument Design class he taught last year, and he had a specific piece in mind. 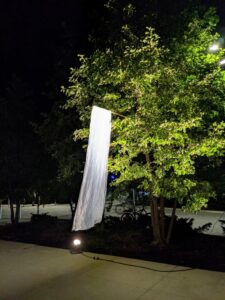 Zephyra is an audio-material collaboration with wind. It’s made up of light blue organza fabric, an audio sample of Martinez’ brother playing a wooden flute, and a wind sensor in communication with Arduino and Max MSP software.

“Its presence is meant to be simple and malleable,” she explains. “Sheer fabric laced to a tree branch or anchored by a rock in the grass, I imagine its movement as the wind’s shadow. It seemed especially playful on Northwestern’s campus near the lake, and it inspires me to think of the self-taught songbird: my brother.”

The sound textures are manipulated by a patch made in Max MSP in tandem with a wind sensor and an Arduino that captures wind speed data. The wind speed data affects the delay, pan, and pitch of the sound sample: a flute masked with a droning shimmer.

Students from the Department of Theatre also added a personal touch to Martinez’s work, designing backlighting and attaching the fabric to a metal pole to a tree on campus, draping it like a long, sad flag.

A Future Full of Collaboration

Moore, Gillespie, Lussenhop, and Martinez all agree that one of the best parts of being involved with Open House was the opportunity to engage in a new level of collaboration with a different School of Communication program.

“Sound gets involved in everything. It was wonderful interacting with the show directors, production team, and lighting designers,” explains Moore. “I enjoyed making new connections with other creative artists.”

For Gillespie, he sees cross-disciplinary collaboration as a way to activate latent potentials at Northwestern. “It was a pleasure to be a fly on the wall during this event,” he explains, “and to observe varied reactions from a diverse, multigenerational audience. This was a strong starting point for future partnership between the programs, and I’m excited to keep building bridges as we continue to develop this part of the Northwestern DNA.”