One thing leads to another—which is how, in 2011, Regina Martinez ’21 found herself serving as an artistic director for the Pink House, a neighborhood art space in St. Louis. And it opened up a whole new world.

An undergraduate degree in photojournalism and advanced degree in social and economic development had initially led her to an internship at the Pulitzer Arts Foundation, where she connected with the Rebuild Foundation … which later led to her full-time role at the Pink House.

Building a community within a community, she worked with local artists to hold sessions with children in nearby neighborhoods that served as platforms for creativity. They interacted with everything from photography and painting to yoga and meditation.

“I learned more about my skills there than I’ve ever learned,” says Martinez. “The space and programming evolved based on the interests of the people who spent time there. It was intimate, organic, and informal, which are naturally part of my process and approach to most things.”

During her time in St. Louis, she also helped bring the city’s music, art, and social scenes closer together through the clothesline: an art and music series that paired visual and musical artists for a monthly night of collaboration, thought, and conversation.

Although the project is on hiatus (the three 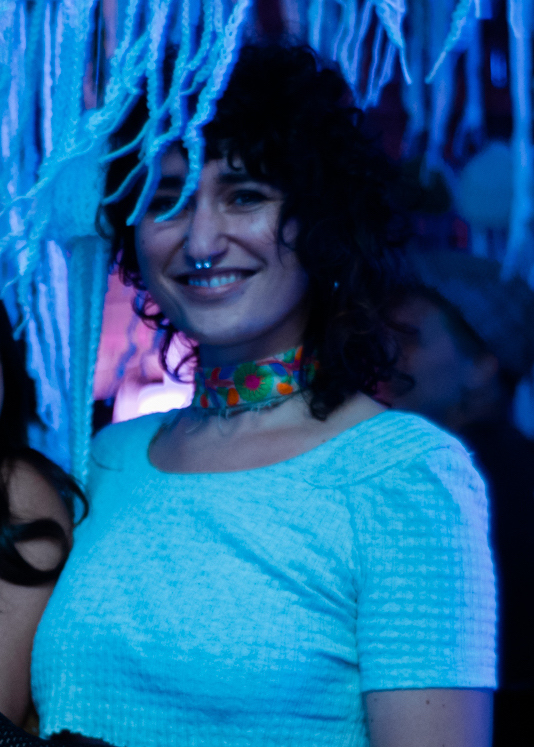 founders now live in three different cities), Martinez says the experience influences everything she does today. “We brought together artists that may have never ended up in the same room. Those experiences and qualities affect the way I work and collaborate.”

When the Pink House closed its doors in late 2016, she moved to Chicago to serve as a program manager for Threewalls, an arts-based nonprofit. As she developed programming and celebrated other artists, Martinez realized she was losing touch with her own creative practices.

When the pandemic hit in March, it gave her time to pause and reconsider her next steps … which led her to Northwestern’s MA in Sound Arts and Industries program. “It was time to turn a corner and walk back to myself,” she says.

The one-year format seemed doable, especially because she lacked formal sound training—although, as she thought about it, she realized she had been experimenting with sound for years.

More than a decade ago, Martinez began recording interactions with her mother. “I wanted to document certain aspects of my relationships with people very close to me that aren’t definable in any other way except for this dimension of sound,” she explains.  She continues to capture pictures and sound recordings as forms of notetaking and listening.

For Martinez, sound is the threshold between memories and the present. “I became really interested in treating basic units of memory like compositional material: meant to be overheard like a poem by its composer but also in a shared sense in the present,” she says. “I had conceptual ideas, but I didn’t have confidence about my technical capability. This program could address that.”

Although earning a master’s degree in a pandemic has its challenges, she says it’s also been a blessing to go through such an uncertain time with a group of peers. Although they’re studying and interacting virtually, she says her cohort is still close.

Professors like Senior Lecturer Stephan Moore have also been supportive in helping students through online learning and dealing with the feelings that come along with it. “The idea of a ‘safe space’ means different things to different people,” Martinez explains. “There’s a preciousness and tension with learning to breathe in a virtual space together. Our professors are lovely at pushing through it.”