Raised in Chicago by PhD-educated parents and serving as high school valedictorian when he graduated in 2000, learning and academics have always come naturally for Jabari Evans. As he grew up, he also developed a love for music as a teenager—hip-hop in particular.

When he arrived at the University of Pennsylvania to study communication and media studies, Evans was surrounded by people pursuing music as a career…which inspired him to follow the same path.

“Many people think you’ve got it made in the shade once you land a record deal,” says Evans, “but that’s when the real work begins. Of the thousands of albums put out yearly by major labels, less than 10% are successful—they essentially pay for the other 90% that aren’t pulling in as much money.”

After meeting Michael Aguilar (Double-O) at the University of Pennsylvania, Evans took on the stage name Naledge and the two formed hip-hop duo Kidz in the Hall. Establishing partnerships with independent labels, they sold 60,000 copies of their debut album in 2006.

As their fan base 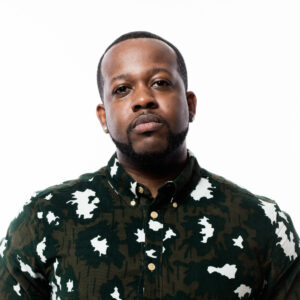 grew, Kidz in the Hall released a second album—and it was a major win. They sold 30,000 copies in the first week, had a single on MTV’s Total Request Live countdown, and joined MTV’s Campus Invasion Tour. After releasing a few more albums—and partnering with a new label that was eventually bought out—the duo began releasing music for free online and focused on live shows.

Touring took up more and more time, and Evans started thinking about other goals he wanted to accomplish: more songwriting, being back in the studio, and even going back to school. So he put his music career on pause to focus on higher education, attending the University of Southern California to earn a master’s degree in social work.

“What I study is based on life experience,” says Evans. “Many people think the music industry and academia are divergent, but it’s actually the opposite. If I hadn’t been in those environments and in the music industry, I don’t know if I would’ve had this positionality as a researcher. I get satisfaction from thinking through problems, thinking about the world, and answering questions.”

As Evans experienced life as an academic, he decided to pursue a doctorate as well—which brought him to Northwestern, where he’s earning a PhD in Media, Technology, and Society while serving as a research fellow with the Center on Media and Human Development.

As students and faculty got to know Evans, they wanted him to meet Jacob Smith, founder and director of Northwestern’s MA in Sound Arts and Industries program. The two talked about ways to incorporate the hip-hop industry into Smith’s History of the Recording Industry course, and Evans served as a guest lecturer and participated in a podcast project. Soon after, he was invited to be an advisory board member.

“I’m working on research about how DIY artists utilize social media, and some of the things I’m finding fit squarely within subjects the program wants insight on,” Evans explains. “I have context to add not just because of my industry perspective, but also because I took an unorthodox route to success. It’s key for students to understand that it’s not as linear as it once was. Not everyone will go to a recruiting event and be placed into a job for 15 years.”

As a new advisory board member, Evans’ goal is to strengthen ties between Northwestern and Chicago’s local music scene, provide the program with a pipeline to hip-hop musicians and producers, and curate guest speakers who can provide a realistic view of the recording industry and what it takes to succeed. He also hopes to share his own triumphs and failures so students can learn from his story.

“My goal has always been to create a career, and that path is driven by my passions for hip-hop, making music, and helping students take their informal interests into academic spaces,” says Evans. In addition to his academic work, he also volunteers with the Arts and Music Programs for Education in Detention Centers. As a lead teaching artist, he connects Northwestern students with incarcerated young men at the Cook County Juvenile Temporary Detention Center to help them write, record, and engineer their own music.

“Even though the way I pursue music now may not look the same as it did when I was 21, I still want to do songwriting,” says Evans, “but I also want to turn my dissertation into a book and continue to write. As hip-hop studies become more reputable, the artform itself becomes more reputable. I need to be part of that in whatever way I can.”