Remixing the Past, Present, and Future: Introducing Students to the History of Recording

As a musician before he founded Northwestern’s MA in Sound Arts and Industries program, Director Jacob Smith once earned his living making records, playing shows, and writing songs.

When he returned to school to earn his PhD in the Communication and Culture program at Indiana University, much of his coursework focused on film and television—but his background in music and sound meant he was always listening as much as he watched the screen. 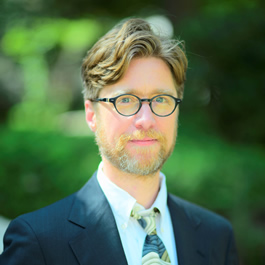 “In most media programs, there’s a type of Intro to Film class where you learn about film, why it’s so important in today’s society, and the history behind it,” he explains. “I always thought it was strange that there were no classes offering a broad overview of the recording industry.”

So, Smith decided to create the curriculum he felt was missing. He first taught the subject of recording history as a graduate student. When he arrived at Northwestern, he relaunched it for the MA in Sound Arts and Industries program with a slightly new approach.

Not only would students learn the history of the recording industry, but they would also hear from industry professionals. He envisioned guest speakers sharing professional advice and insight on the field’s current landscape. “I love bringing people in who are working on the frontlines of the industry today,” he says. “That brings this really timely element to the classroom and, at the same time, shows how useful it is to have a historical perspective on emerging trends.”

With music available 24/7, and most songs available on apps like Spotify, Smith thinks now is the perfect time to trace the long history of the recording industry.

“Students are exposed to so much recorded music, but it’s difficult to get a sense for how all the pieces fit together,” he says. “How does music from the ’60s relate to the ’20s, the ’80s, or now? This class helps them put it all in context.”

As he selects guest speakers, Smith looks for professionals who offer a range of perspectives, are working on interesting projects, and can discuss both the present and the future of the industry. (He takes suggestions from students and colleagues, too.)

After an introduction and a guided conversation about career paths, the guests take questions from students. “It hits home for students to hear stories like, ‘I was in a college program just like you, and here’s what I did to end up here,’” says Smith. “That’s really useful to hear. Career trajectory paths are inspiring, interesting, and useful as students start to imagine what they’re going to do after they graduate.”

Most recently, History of the Recording Industry guests have included:

For some students, meeting these industry professionals is even leading to internships and jobs. “There’s something to be said for the opportunity to not only hear about how an industry works, but also do some networking and meet people who share your interests,” Smith explains. “It takes the knowledge we gain about history to another level. It’s also valuable career development information from people working at the heart of an industry we’re excited about.”