The Student Has Become the Master 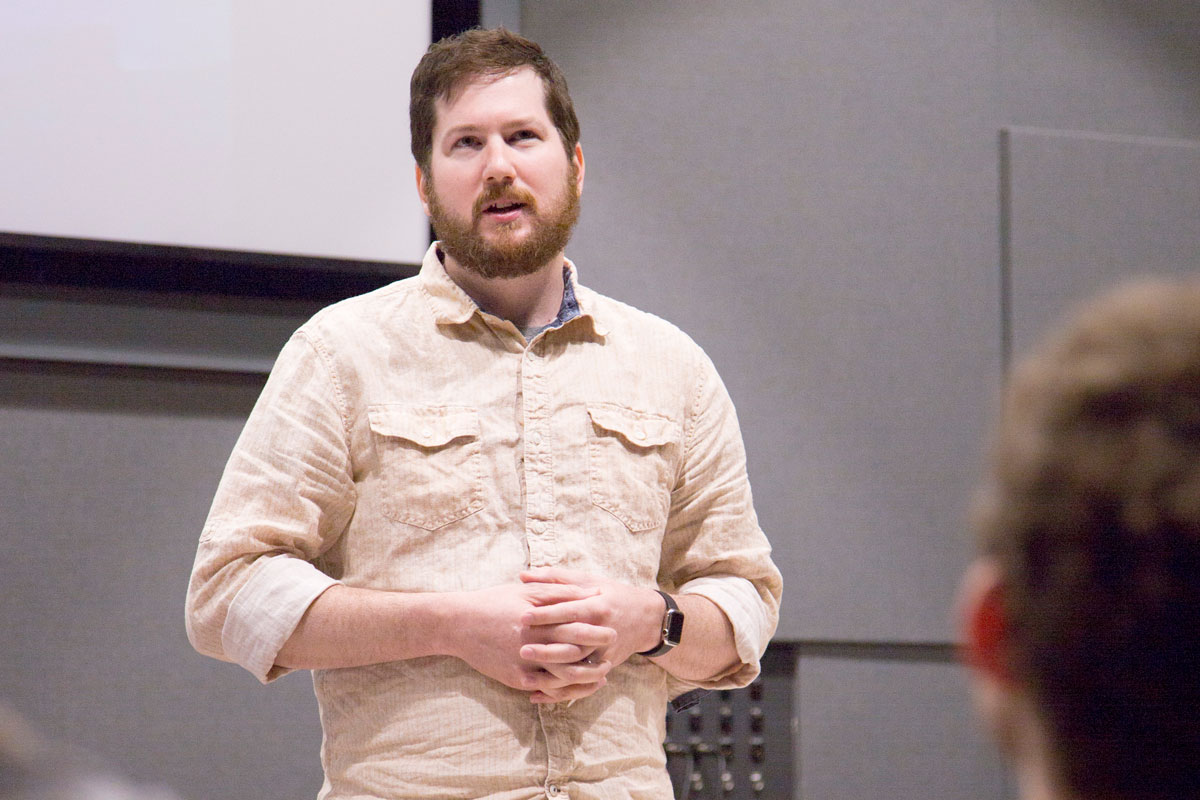 Russ Gillespie is a graduate of the Northwestern Sound Arts and Industries program and recently returned in another capacity—as teaching assistant.

Q: Tell us about your educational and professional background and how you chose Northwestern’s SAI program.

A: Ever since I graduated with my bachelor’s degree in music composition from Oakland University, I have worked in technology for Apple and Northwestern to support my musical life as a performer and songwriter. I had been looking for the next step in my education and previously looked at programs such as the Master’s in Composition for the Screen from Columbia but was drawn to the multi-faceted nature of Northwestern’s  Sound Arts and Industries degree. My interests stretch beyond just composing music, so the cross-disciplinary approach that characterizes the program presented the degree I didn’t know that I was looking for.

I saw an ad for the program pop up in the spring before the first year of the program. I spoke with Associate Director Neil Verma about the potential of attending in a part-time capacity while continuing to work in IT for [Northwestern’s School of Education and Social Policy]. He and Director Jake Smith were very accommodating in this regard and I have enjoyed being a part of the program as a student for the first two years, and now post-graduation, as a teaching assistant.

Q: Why did you seek an advanced degree in sound?

A: My work and interests are in the areas where music and technology meet. I was very interested in pursuing video game sound design and composition and made that the focus of my work and research. However, exposure to other forms of interactive audio and sound science, philosophy, and humanities served to round out my education and opened my mind (and ears) to a range of new ideas and approaches that I’ve tried to integrate into my compositions and projects.

Q: You were a TA for the Virtual Audio Production class for the Winter 2019 quarter, tell us about that.

A: This was actually the first time this class was offered. The areas of game audio and “360-degree audio” are extending into new markets and becoming more mainstream. Stephan Moore, who was my advisor for my Study in Sound (Capstone Project), offered me the opportunity to be his TA for this new class. It made sense because of my focus on working with sound for games, game design tools like Unity 3D, and audio middleware such as Wwise and FMOD. We worked together to design a course that would provide students with a solid foundation in the fundamental ideas and approaches for producing audio in a spherical environment.

Q: Can you talk about some of the concepts students learned about and how those concepts were applied practically?

A: The course was broken up into a couple of sections. First, we focused on the emerging field of “Ambisonics” which is a method for recording and encoding/decoding sound in a spherical manner. For instance, we were equipped with a set of new Rode Soundfield NT-SF1 microphones that arrange 4 microphone capsules in a tetrahedral pattern to capture sound coming from all sides in “A-Format.” One of the unique features of this method is the ability to then decode the sound in any way that is needed in post-production, (e.g. extracting directional signals from the “sound field” recording or using the full sound field as a bed for other sounds to be incorporated afterwards). Capturing sound in this manner or alternately encoding standard mono/stereo signals into an ambisonic format allows for the sound to remain completely flexible until the final decoding phase.

In the second portion of the course, we looked at implementing sound into game environments using Unity3D and Google Resonance. We implemented projects in head-mounted displays like the HTC Vive which allowed students to situate their sound designs in a VR space.

Q: What types of projects did the students work on?

A: Our students created projects ranging from ambisonic music arrangements and compositions, to 3D video game prototypes, podcasts, and sound for 3D videos.

Q:  Who were some of your guest speakers and what kind of impact do visiting professionals have on a class?

A: Throughout our course, we had visits from John Tatooles of Sound Devices and Steve Pardo of Harmonix Music Systems. These two talks provided insights from contrasting sides of industries in sound for visual media. It was valuable to note the differences in film/TV audio production paradigms versus game audio production, especially from the perspective of an innovative company in Harmonix, who are pioneers of the “Music Video Game” genre with titles like Rock Band, Dance Central and Super Beat Sports.

As a student, it is incredibly valuable to learn about the journeys of these accomplished industry professionals and to develop connections as we set out into the field.

Q: What does it mean for you to be able to come back to the program you earned a degree from and help the next cohort of students?

A: At this point, I have been involved in each of the three years of this growing program. The experience has been incredibly rewarding as I’ve had the chance to work with three different cohorts and develop relationships with so many wonderful creative minds, from students to staff, faculty, and our industry visitors. I am grateful to have been invited to continue growing the program through the teaching assistant role and I am looking forward to the opportunity of further refining the course and seeing how the game/virtual audio community at Northwestern can develop over the coming years.