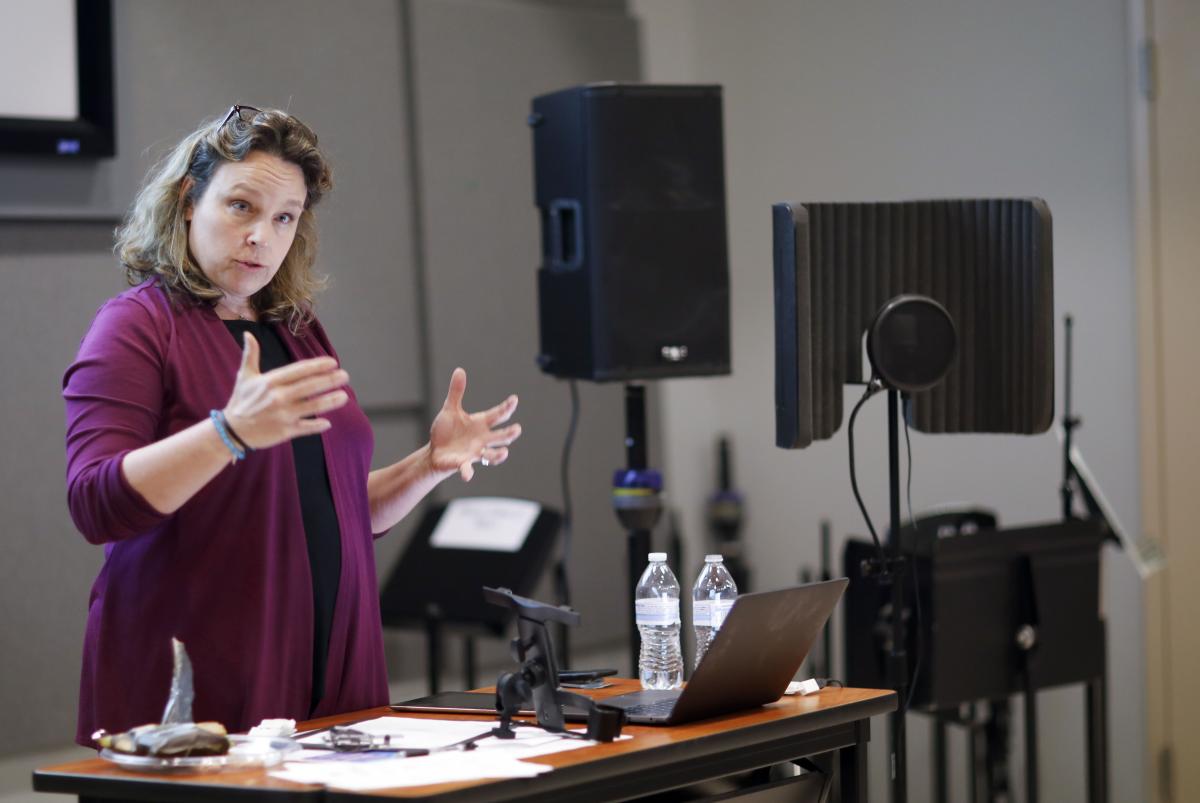 The workshop had two parts. First, Hicks gave a brief presentation of the voiceover industry, theory and practice. The second half of the masterclass was a mini recording session in the new state-of-the-art Soundstage, where students read advertising copy and received advice from Hicks.

After earning a theater degree from Northwestern in 1988, Hicks was working in regional theater in Chicago when her boyfriend, now husband, asked if she’d be interested in voicing a spot for Bally Fitness.

“He called and said, ‘I’m working on this Bally Fitness spot and I think your voice would be good for it,’” Hicks remembers. “Want to do it?”

Hicks took the job and instantly fell in love.

“Everything came together, and I left going, ‘This is it!’ Shortly after that, I moved to LA and decided this is what I was going to do.”

Since her voiceover days at Bally Fitness, Tish has voiced commercials for Citibank, Subaru and Burt’s Bees. Last week, she came back to her alma mater for the masterclass, “Voiceover: The Actor’s Secret Weapon.”

“This is something, no matter what kind of performer you are, everybody should have in their arsenal,” says Hicks. “People think this is going to detract from their goals of becoming a superstar, but it’s not. Voiceover has many ways it can be applied, so I was excited to explore that with the workshop.”

Hicks hopes her workshop got students thinking outside the box – beyond the more traditional uses of voiceover, like in advertising or animation.

MA in Sound Arts and Industries student Russell Gillespie attended the workshop and says it opened his eyes to the unique opportunities in the voiceover industry.

“Supporting yourself professionally as an artist is extremely difficult and requires maximizing [your] revenue stream. Since voiceover can be done on the go with an iPhone and a nice USB mic or similar, it means you’re free to generate income from anywhere.”

One relatively new way voiceover is being applied? Technology. Look no further than Amazon’s Alexa or Echo, or Apple’s Siri.

“You start having human interaction with this thing that is listening to everything you say,” Hicks says. “Voiceover has humanized a mechanization that has become part of our lives.”

In addition to her theater training, Hicks is also a trained vocalist who worked at The Second City, Chicago’s famous improv comedy troupe that has produced comedians Tina Fey and Steve Carrell, among many others. Hicks says voiceover allowed her to combine her passion for these disciplines.

“I find that I am a good voiceover artist because of all of that training.”

Hicks has also taken a multi-discipline approach to The V.O. Dojo, a training, networking and resource center that connects voiceover actors of all levels. The V.O. Dojo, which recently celebrated its fifth anniversary, is another example of Hicks’ intersecting passions – martial arts and improv.

“A lot of the [V.O.] Dojo concepts come from my martial arts training,” says Hicks. A ‘dojo’ is a room or hall in which judo and other martial arts are practiced.

The Northwestern alumna credits her success in the industry and in her professional pursuits to the education she received at the university – theater and otherwise. She says Northwestern prepared her for a career in voiceover in ways she never imagined.

“I remember first coming to audiobooks and going, ‘Oh, this is what we had every night at Northwestern,’” Hicks says. “Learning to digest literature.”

Hicks was excited to return to the place that gave her a foundation and hoped to inspire others to find their passions, maybe even in voiceover, like she did.

“My voiceover career came out of everything I got at Northwestern,” she says. “I love coming back to campus and introducing people to this.”