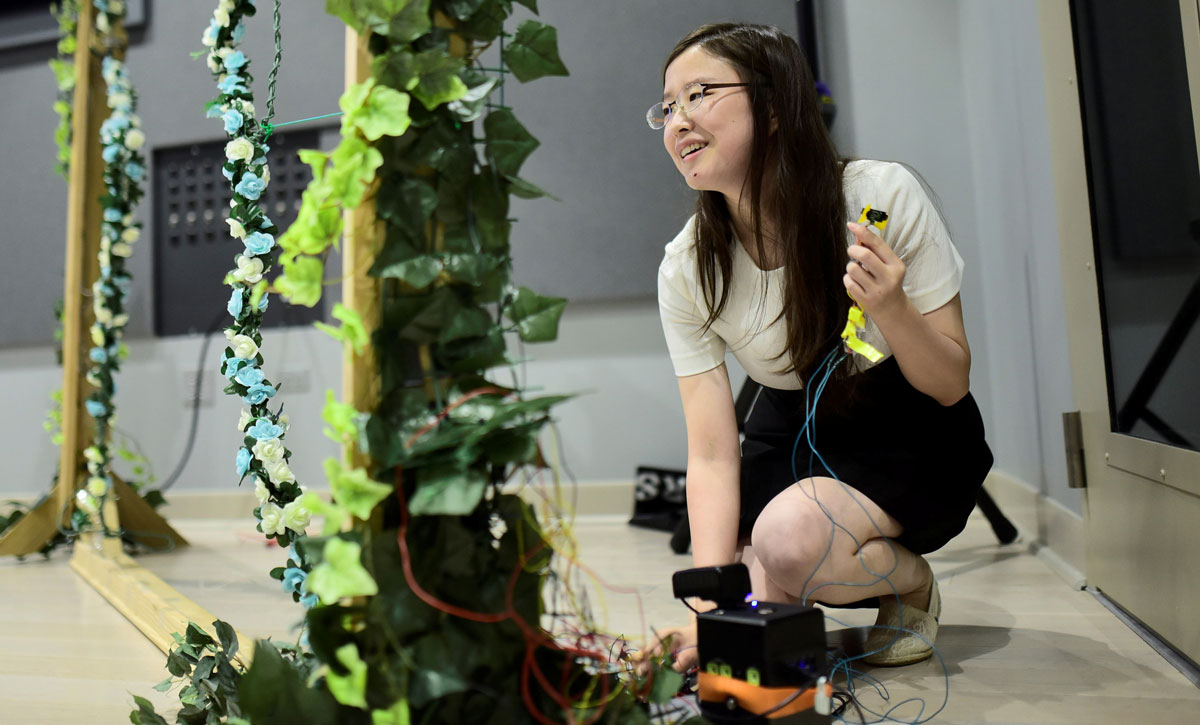 The first cohort of Northwestern Sound and Industries students finished out the quarter by presenting their final projects to fellow classmates on June 9. Student projects varied in terms of subject matter and presentation – from podcasts to concept albums to sound installations.

“It was refreshing not to have to listen to the same thing over and over again,” says student Adam Mizner. “Some other people were making podcasts, and I was afraid it would just be press play and listen to podcast after podcast.”

Mizner’s final project, “Radio Isn’t Dead: A Revival Through Podcasting” was a podcast about podcasts. He says his idea was born out of a conversation he had with his parents during a visit home to Rockford, Illinois.

“I asked both of them if they were interested in podcasts, and neither of them knew what they were,” Mizner remembers.

While Mizner was certainly aware of the podcasting industry before enrolling in the Sound Arts and Industries program, he didn’t fully understand its popularity until he was immersed in the program and learned that many of his professors were also interested in the field.

“I was under the impression that the radio industry was dying,” he says. “But it turns out it isn’t dying; it’s being revived through podcasting.”

As Mizner’s interest in podcasting grew over the course of the year, an examination of the industry seemed like a natural fit for a final thesis. He looked at an Edison Research Group survey on the topic of podcasting, which revealed that of 2,000 people surveyed, 55 percent had heard of podcasting, while 33 percent had listened to a podcast.

Mizner then set out to conduct research of his own.

Mizner wasn’t surprised by the numbers, but by the reason most people gave for not tuning in to podcasts.

“It’s horribly ironic that when I asked if they listen to podcasts, most people would say they don’t have time.”

The beauty of a podcast, Mizner says, is that it’s convenient and people can listen anywhere.

While his final project was a 12-minute podcast, Mizner facilitated a conversation on his findings – which also included tips for those looking to start their own podcasts – in a presentation.

Xiameng Lin’s approach to her final project was less traditional. Lin says she knew from the moment she started thinking about her thesis that she wanted to produce a hands-on experience.

“I knew that I was interested in an interactive piece,” Lin says. “I wanted people to interact with my music, be a part of the process and contribute to the music.”

Lin’s finished product was “Memory Tricks: An Exploration of Interactive Music Performance.” She used six photocell sensors connected to an Arduino Uno – a microcontroller board that allows you to write and upload computer code. The photocell sensors are affected by light: by blocking or shining light onto a sensor, you can change the data sent to the computer and modify the sound. The computer then sent the collected data to Max Live, a visual programming environment that allows users to build instrumental and other sound effects.

“By interacting with the photocell sensors, individuals can control parameters of the composition or add new sounds and melodies, or trigger a randomization process,” Lin explains.

While the project relied heavily on technical components, Lin also wanted to make sure “Memory Tricks” was deeply personal.

“Each section [in the room] corresponded to a part of the composition,” Lin says. “Interactions with playful objects and music were designed to establish personal relationships between individuals and the composition by evoking memories of their own.”

Three Northwestern University documentary film students filmed Lin’s process for creating the installation and captured footage of people interacting with it. Lin showed this video to her class and professor.

Like Mizner, Lin says her time in the Sound Arts and Industries program helped to expand her horizons in the sound industries and ultimately informed the topic for her final project.

“I was always interested in interactivity,” she says. “But coming to this program gave me a lot of training in the technology.”

Interested in learning more about what students do in the MA in Sound Arts and Industries program? Check out our course curriculum.