When MA Sound Arts and Industries Lecturer Chris Mercer had the chance to bring Paul Koonce’s lecture-concert featuring wave field synthesis compositions to Northwestern, he seized the opportunity and invited the composer to showcase his latest project.

“Paul is a composer I really admire and have known for a long time,” explains Mercer. “We were eager to get him here in some form or fashion, and we finally made it happen.”

Koonce earned a PhD in Composition from the University of California, San Diego, and he is currently professor emeritus at the University of Florida. Working as a software developer, he has explored the manipulation of sound and timbre through the use of computer technologies, developing tools to delve into parallels between musical and environmental sound.

After attending the 2022 SEAMUS (Society for Electro-Acoustic Music in the United States) National Conference in Kalamazoo, MI, Koonce headed to Northwestern University in early April to showcase his latest work.

During his lecture-concert, he makes use of 24 small, high-quality speakers to create a sound stage in front of the audience. It takes everyday soundscapes and transforms them into something completely different—such as raindrops turning into footsteps. 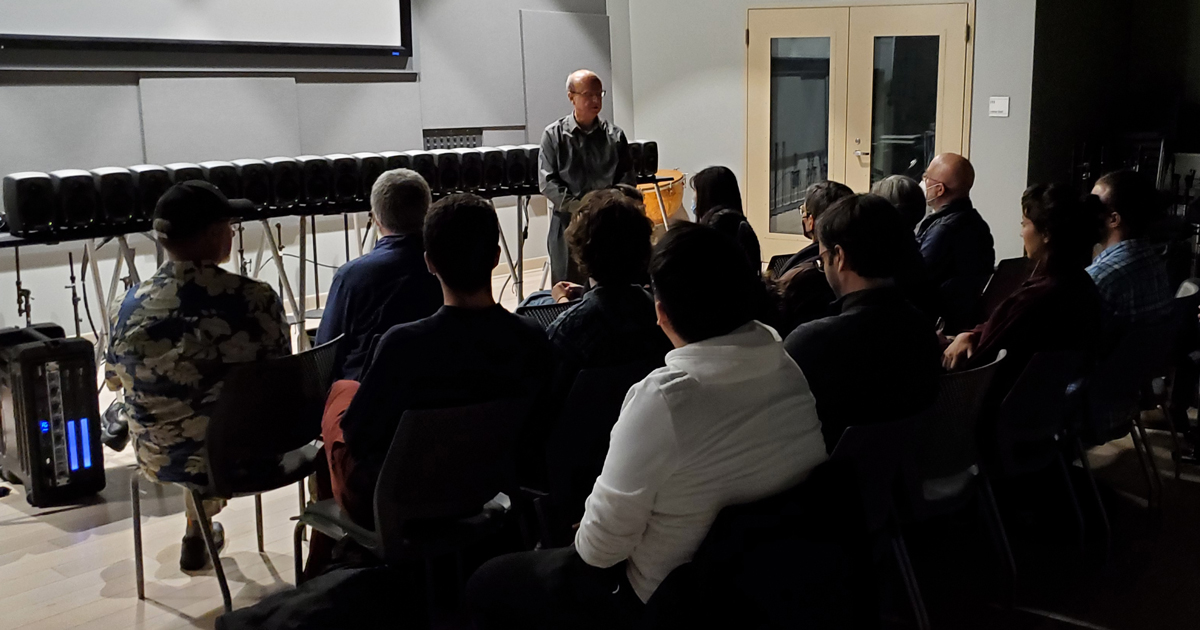 In the traditional world of computer music, composers rely on 8-channel or 2-channel (stereo) sound that envelops the listener with speakers to immerse them in what they hear.

Wave field synthesis takes a different approach. By lining speakers up close to one another across the stage, Koonce creates a deep sound field that extends from the speakers away from the audience. “It’s very spatially precise,” explains Mercer. “You can send sound through any combination of speakers, and that sound holds up no matter where you sit in the audience. It can create sound illusions, with one sound that seems close and another that seems 30 feet in the distance. And it doesn’t degrade the way stereo sound does when you’re off-axis.”

Because wave field synthesis creates a sound field in front of the audience, the performance is best experienced by small groups. To accommodate this, Koonce presented his work three times for groups of between 20 and 30 people in John J. Louis Hall.

“He likened the experience to a ride at Disneyland,” says Mercer, “where people got to line up and wait for the next performance.”

He was able to help Koonce set up and listen in on two of the three shows. As he switched seats, Mercer says it was a different experience each time. “It’s such complex, interesting work. It’s pretty easy to sit through it three times. He puts in a lot of detail. You almost have to listen to it a few times—perhaps with his guidance—to pick up on all of it.”

During each performance, Koonce shared three pieces. In one of the pieces—To Think of Rain—Koonce wrote poems that were displayed on a screen as they were also read aloud as part of the sound coming through the speakers. Mercer says the poems acted as a narrator, helping listeners better understand the music.

“Every piece was unique and meditative but also stimulating,” describes Kate In ’22. “It was especially delightful to experience compositional moments that wouldn’t be possible in stereo. The feeling of rippling or rotating really came to life in the wave field array.”

She attended to learn more about how composers like Koonce create multichannel compositions. “I snagged a good seat in the middle so I could hear the sound move through the wave field array from a central position,” she explains.

After the concert, In also attended a discussion Koonce led the next day about his process and theory behind the technique.

After being introduced to Koonce’s work, In says his style—which he describes as a mix of sound design and electroacoustic music rooted in magical realism—will influence her own sound work and inspired her to try new technical concepts.