As Jacob Smith and Neil Verma, the co-founders of Northwestern’s MA in Sound Arts and Industries program began to work on a sound studies curriculum a few years ago, they realized that the vast majority of work in this area focused on Western objects and concepts.

“There’s a canon of artists, artworks, and films made by Western people,” explains Verma. “We thought it would be interesting to take some of the questions asked by sound studies scholars and move them into the context of another continent.”

Through a project called Sounds of South Asia, Smith and Verma worked with their colleague Laura Brueck, Associate Professor of South Asian Literature and Culture, to bring scholars to Northwestern who were working on different aspects of sound in the South Asian context: people writing about contemporary audio books, Prime Minister Modi’s podcast, soundtracks in contemporary Hindi films, or contemporary sound art in places like Delhi and Goa.

“We brought these people together and created a series of lectures and workshops,” he says. “But there was no book that captured it all. We wanted to assemble a series of writers from these lectures—who were all interested in sound in one way or another—to put a book together. It ended up being mostly focused on India.”

He says many of the authors were interested in questions of citizenship, so the book is aptly named Indian Sound Cultures, Indian Sound Citizenship. Its goal was to move sound studies to areas beyond the West. 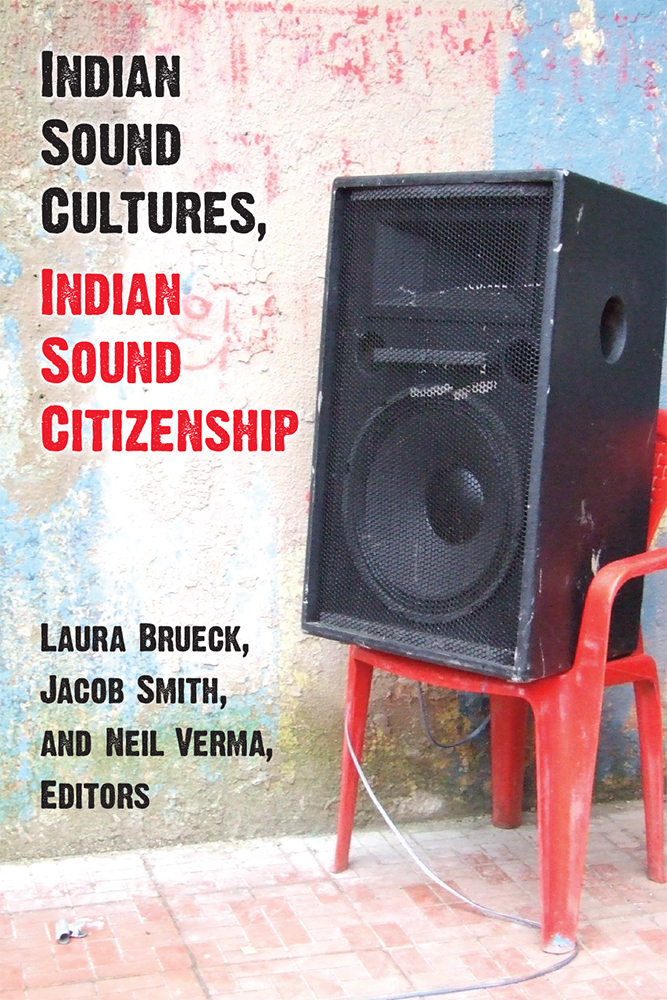 “Traditionally, South Asianists study books, literature, and inscriptions,” says Verma. “But what if they studied sound instead? In India, when questions of citizenship are raised, they’re often bound up in questions of sound. Who is allowed to speak and who isn’t? Which kinds of music are allowed to be played and which aren’t? How do different voices express identities that include or exclude people? This book is a powerful way of exploring those questions and helping us understand more deeply how sound works.”

Smith, Brueck, and Verma co-wrote the introduction and served as the book’s editors. Together, the group selected authors from a variety of disciplines—ethnomusicology, cinema, media studies, communication studies, etc.—curating the authors’ work to create a story flow that helps share narratives while provoking questions.

Alexis Bhagat, intermedia artist, writer, and cultural producer, was one of those authors. His essay— Listen, My Heart—written in partnership with Lauren Rosati, assistant curator at the Metropolitan Museum of Art, tells the story of ((audience)), an organization they created together to advance aural arts through wide distribution and new contexts for works by emerging and established sound artists and composers.

((audience)) had gone on hiatus since the birth of Bhagat’s daughter in 2014, but Indian Sound Cultures, Indian Sound Citizenship provided the perfect format to reintroduce the organization and its shows. Its exhibition, Listen My Heart, collected audio compositions that reflected on the soundscape of India. The works are presented in a darkened cinema hall as a 5.1 surround soundtrack with no images.

“I was very surprised by how many of my family members in India—who aren’t involved in sound studies and don’t pay much attention to my curatorial work—were excited to hear about this book and seemed genuinely enthusiastic to read it,” says Bhagat. “Most of them live in the Delhi metropolitan area now, which has changed so dramatically in the past 20 years. Films and photographs give people a visual reminder of the city of their youth. I hope this book can give people a way to think about and recollect lost soundscapes.”

In a new class focused on issues of race and sound, Verma anticipates drawing from Indian Sound Cultures, Indian Sound Citizenship this winter for discussion.

“Sound studies is in an interesting moment right now,” he says. “Questions are being focused on social inequality, especially race and gender. What is a sound? How do we interpret sounds? What do they mean? How do they give our lives meaning? Moving beyond the Western context and into the global South is crucial to making sure this class not only introduces students to some of these issues, but also brings them to the cutting edge of what people are writing about in sound studies.”