Finding a Place to Experiment with and Refine Sound Design Skills

When Andrew Littleton ’21 thinks back to playing video games like Madden NFL 2003, he wasn’t particularly struck by the fast game speed or the play-by-play analysis—what he remembers is the music.

In fact, he credits BioShock and the final mission of Halo 3 for sparking his interest in video game music composition.

“I was playing BioShock and one of the enemy characters was walking around on a floor above me,” says Littleton. “I recall playing and listening, and I could hear them walking around. Right then, I knew that sound design was what I would be doing.”

After that, every decision he made was done in hopes of 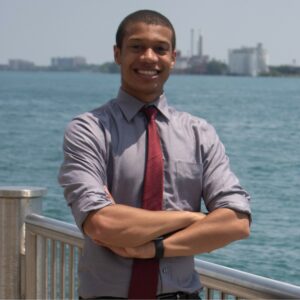 moving him closer to video game sound design or programming. As an undergraduate student at Loyola University Chicago, he majored in computer science after seeing that requirement listed in video-game job ads. Beginning during his freshman year of college, he also did freelance sound design work for Loyola’s Department of Fine and Performing Arts and eventually as an engineer for Lookingglass Theater Company.

One afternoon, Littleton was catching up with a former roommate who works at production studio Periscope; she mentioned that one of her coworkers was a graduate of Northwestern’s MA in Sound Arts and Industries program. When Littleton heard about the degree, he knew he wanted to learn more. A quick message on LinkedIn connected the two, and Littleton was excited about what he heard.

He had been searching for a program that would help him connect with people who were as interested in sound as he was and could offer meaningful feedback to improve his work. “This was the only grad school I wanted to go to,” says Littleton. “It was my No. 1 choice. I knew it’d give me the skills and practice I needed. In my professional career, there had been lots of, ‘Do that thing we need you to do right now.’ I didn’t have a chance to refine and practice. I wanted a place where I could try things, fail, and learn.”

A final class project was one of his favorite experiences for that very reason. Littleton decided he wanted to create a recording of an object, so he attempted to capture the sound of his record player. But he soon discovered that the idea wouldn’t work the way he planned. After thinking about other objects that make noises we don’t often hear, he decided to record the sounds of his custom-built desktop computer.

“I recorded the sound of the computer playing a CD track. I had contact mics on the hard drive, optical drive, graphics processor, and CPU. I also had a mic sitting in the case itself,” he explains. “I had never really listened to the inside of my computer before. Everything sounded very intimate. When I booted it up, you could hear the hard drive’s motor turn on and spin. Then you heard the reading arm test itself, move from one end to the other, and click. You could hear it moving around as it was reading data. I got to use my production experience and philosophical knowledge to think about how an object itself has lots of intricate, moving parts that make a lot of noise if you really listen.”

In addition to earning his MA in Sound Arts and Industries, Littleton also has the chance to experiment in a role he landed with Samsung Electronics as an audio/haptic UX designer. He’s the first audio expert to work in one of Samsung’s newer studios and has brought new processes and ideas to the team.

Someday, he envisions becoming a video game audio director—and says Northwestern will help make it happen. “Everyone here is passionate about sound and willing to say, ‘I like what you have but here’s how it could be better.’ That’s something I haven’t had for most of my life. People always told me my work sounded great, but I knew it could be better. I really appreciate the community Northwestern builds—even when we’re studying virtually.”