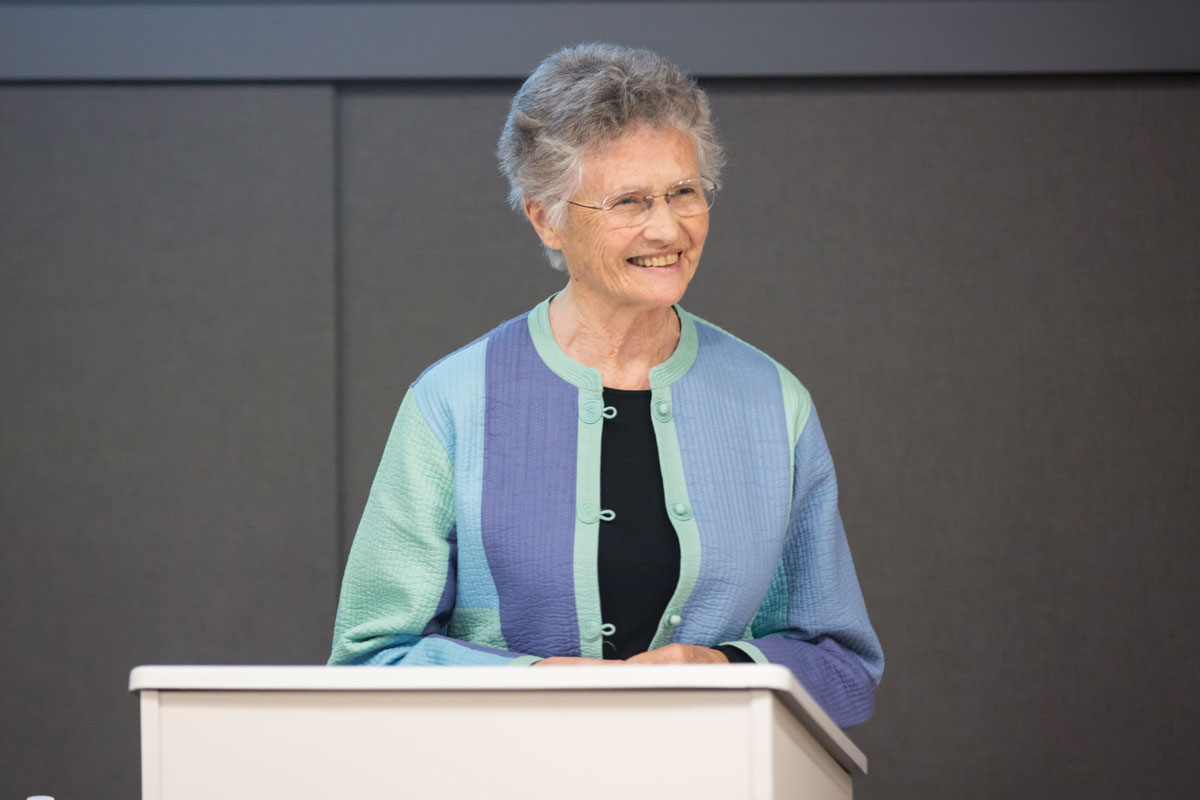 “Wild Energy” is the name of the 2014 outdoor installation Lockwood created in collaboration with Bob Bielecki. The project is a 46-minute loop that begins with solar oscillations recorded by SOHO, a European spacecraft, and ends with ultrasound recorded from the inside of a pine tree, slowed down 10 times to be audible to the human ear.

The other piece Lockwood discussed during her talk was “A Sound Map of the Danube,” an example of sound mapping, a technique Lockwood has used for much of her career.

Europe’s second-longest river, the Danube is in Central and Eastern Europe. Lockwood’s installation mapped 59 sites along the river using natural sound and interviews and reflections from the region’s people. A map accompanied the sound installation.

“Sound mapping came out of the desire to find out about natural environments by going out and doing field recording,” says Northwestern Performance Studies Assistant Professor Shayna Silverstein, who attended the talk and teaches in the MA in Sound Arts and Industries. “[Lockwood] was part of the group of pioneers who made sound mapping a thing.”

Born in New Zealand, Lockwood was a trained musician and composer who began creating performance art pieces with choreographers, sound poets and visual artists in the 1960s and 1970s.

Stephan Moore, a lecturer in Northwestern’s Radio/Television/Film Department and faculty member in the MA in Sound Arts and Industries, first worked with Lockwood in 2007. In 2013, Moore was working on an exhibition of sound art for the Caramoor Center for Music and the Arts in Katonah, New York when he commissioned Lockwood’s installation. That piece became “Wild Energy.” The two remained friends, and Moore arranged for Lockwood to come speak with Northwestern students.

This year, Sound Arts and Industries students have had several opportunities to learn about more traditional sound careers through various speakers, programs and Career Treks, but Lockwood presented a fresh perspective.

“[Lockwood] provided a different perspective on how the skills [students are] learning could be applied,” Moore says.

Moore is also teaching a class on John Cage, an American composer who like Lockwood, used sound in non-traditional ways. Cage’s career intersected with Lockwood’s, a fact Moore thought would interest his students.

“I thought that for these students, being able to come in and talk about the historical sweep of the 20th century avant-garde would be interesting,” he says.

But even those who aren’t enrolled in Moore’s course or in the Sound Arts and Industries program gained valuable information from Lockwood’s talk.

“She’s delightful as a speaker and she’s also a living embodiment of the field,” says Silverstein. “When she speaks, she’s able to speak from decades of experience and being there as the field emerged.”

According to Moore, “Wild Energy” was intended to be experienced in the woods on a bench or in a hammock surrounded by speakers, with the “sounds swirling up and around you.”

While students who attended the artist talk were not able to experience “Wild Energy” in this way, they did have the unique opportunity to listen to the installation in the school’s state-of-the-art facilities with the artist nearby.

“It’s different to listen via laptop versus listening with the artists in a high-tech room,” Silverstein says. “It was nice to be able to listen with Lockwood herself.”