Studying the history of sound media and radio dramas from the ’30s, ’40s, and ’50s is Neil Verma’s passion.

“Unlike the history of cinema or literature, people who make today’s audio dramas don’t know a lot of history about them,” he explains. “It’s a medium that doesn’t have a ‘memory,’ which is both an advantage and a disadvantage.”

As the associate director of Northwestern University’s MA in Sound Arts and Industries program, he helps students better understand their own sound creations by infusing history into his teaching.

With audio dramas like Homecoming and Blackout bringing the art form back into the limelight in recent years, Verma is enthusiastic—but notes that many current shows aren’t informed by the past. And this gave him an idea.

Using Alfred Hitchcock’s Rear Window as inspiration—one of the most famous movies of all time—he envisioned a class where students would create an audio drama centered on the film. The original script was written by Cornell Woolrich; although Rear Window never became a radio drama, Verma says nearly every other Woolrich story did. 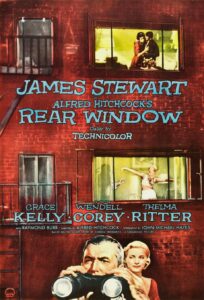 This particular film was selected to study for many reasons, but at the top of the list was this: “Hitchcock played with lots of fun things in terms of sound in Rear Window,” says Verma. “It’s a film with its own subconscious.” For example, much of the movie’s dialogue occurs away from a microphone—unusual in classical American cinema. Instead, music and sound effects take priority.

Before the class started, Skywalker Sound’s Gary Rydstrom (who creates Star Wars soundscapes and is a regular Northwestern guest speaker) introduced the students—a mix from Sound Arts and Industries, Writing for the Screen and Stage, and Musical Arts programs—to Rear Window and told them what to listen for.

Last spring, the cleverly named Ear Window course began. Structured into two halves, the first focused on listening to radio plays from the ’40s and ’50s to better understand techniques used by radio dramatists, as well as reading up on theory. At the end, Verma led a brainstorming session to help students decide how they wanted to approach the second part of the course: creating their own audio dramas.

“We ended up creating two,” he explains. One group made a piece that focused on building out stories about the secondary characters that enter the world of Rear Window. The second group created a contemporary piece—a thriller mimicking the spying and eavesdropping that occurs in the film while telling a new story about obsession and fascination.

“These projects wrapped up a lot of different skills used in the production of an audio drama,” says Verma. “But they also allowed students to experiment with things like casting actors, writing scripts, and making decisions about recording in mono or stereo. Audio drama is here to stay, so we’ll likely offer a course like this again and work with a different text or film. I love the idea of exposing students to creating something with theory and practice, but also using a very specific boundary.”