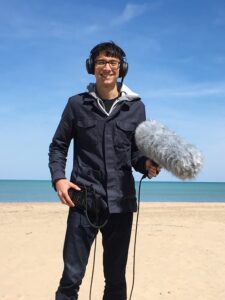 When he was a child, Philipp Gaissert ’19 never finished his homework until he caught up on his television favorites: Cartoon Network and Nickelodeon. “I absorbed the details of those cartoons,” he says.

Later, a good friend shared his love of film by giving Gaissert movies to watch. “They were films like The Exorcist, Se7en, and The Good, the Bad, and the Ugly—movies I saw in passing but never engaged with. That’s when I started thinking about media,” he explains.

Previously, Gaissert’s career sights were set on medicine. He graduated from college with a bachelor’s in biology and intended to apply for medical school. But, as he worked as a research assistant and clinical coordinator, he started thinking about his real career interests.

During his search for film study programs, he discovered Northwestern University’s Sound Arts and Industries program. “It’s a marriage between theory and hands-on skills. The faculty want to create new kinds of sound professionals, which jelled with me because I want to be able to create and make.”

As Gaissert wrapped up his internship with Jellyvision last summer, he shared his experiences with us.

Q: How did the internship-search process work for you?
A: There was a speaker in my Virtual Audio Production class who brought up Jellyvision. They originally developed the You Don’t Know Jack game series. It was known for its immersive experience; interactions worked both ways and players felt like a real-life quiz master was speaking with them and responding based on how they played.

The game division split off and became Jackbox Games. After learning about how the company evolved, I applied for and landed an internship with the creative division. Jellyvision now focuses on interactive software that communicates with employees about benefits and finances—with the same immersive style as You Don’t Know Jack. That entertainment-education blend was something that clicked with me during my search.

Q: What was your role at Jellyvision?
A: I worked in the creative division with the media production team: interactive media producers, creative producers, and sound designers. It’s a group of fun, creative people working in an environment that’s a perfect blend of corporate and chill. It’s a well-oiled machine that doesn’t feel like a machine—just like how the software they make doesn’t feel like a computer or machine is involved.

Q: What did you learn at Jellyvision?
A: It was clear that my supervisor sat down with the sound designers and came up with a curriculum for me.

I learned to approach sound design with intent. At Jellyvision, each creative decision you make has a goal. Not only does the sound have to make sense with the animation, but it also has to evoke an emotional response that supports the information being delivered. It can’t distract or be too obvious.

In the past, I believed I needed to make everything literal to match what happened on screen (a bird flies by and you hear a real bird flapping its wings). But you can make a sound that feels like a bird flapping its wings by shaking sheets or gloves. You still land that logic and emotional truth without hitting scientific truth. It helped me approach sound design as a creative, expressive endeavor instead of a technical endeavor.

Q: Have there been any surprises along the way?
A: I told myself I wanted to do post-production sound. I didn’t want to do production sound on set, sitting at a mixer while actors performed or holding a boom.

It just so happened that Jellyvision had video shoots scheduled this summer for client testimonials. I helped with sound recording: setting up the boom mic, getting interviewees hooked up to lav mics, and making sure everything recorded properly. I also helped record interviews and guest speakers at Jellyvision’s Big Ideas Summit.

Now I’m wondering if I should invest in a kit for production sound in case I do freelance production work. It turns out I enjoy it—it was a fun experience! I’m grateful—and still surprised, to be honest—that they entrusted me with that responsibility.”