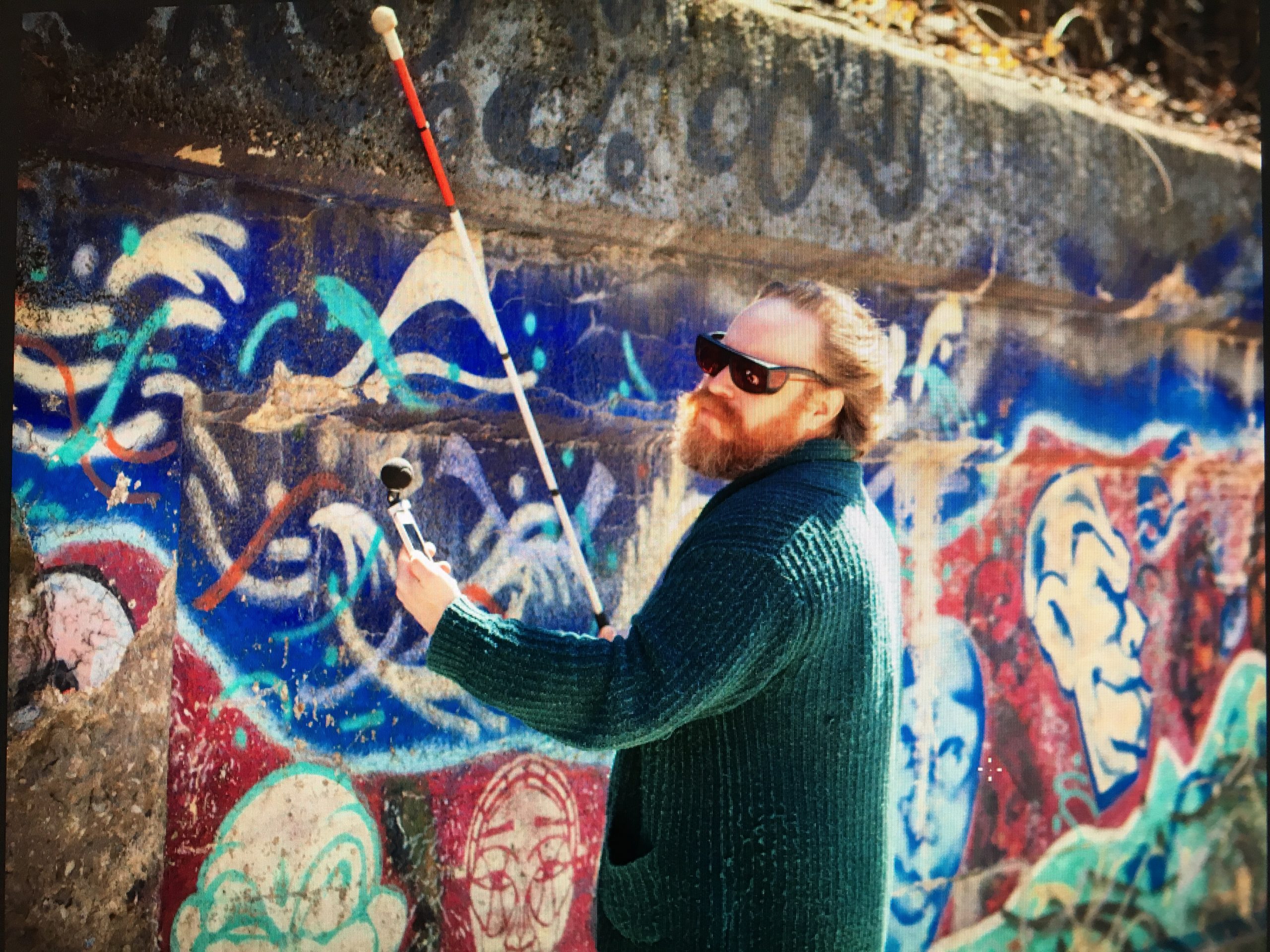 When he was young, Andy Slater ’20 spent lots of time drawing and painting. Growing up in an artistic family, he loved being creative. As he got older and began to lose his sight, he found a new way to show his creativity: through sound.

What started with creating non-musical compositions on a four-track cassette recorder turned into a true art form—one he hoped he could turn into a career.

He moved to Chicago from Milford, CT, to study sound as an undergraduate at the School of the Art Institute of Chicago, where he learned about the history of sound art and continued his sound work.

A few years later, in 2015, he decided to approach his art in a new way: using sound to address his disability (instead of his disability informing his work). As a very active listener, Slater started doing field recordings to capture the sounds he heard around him.

“I would pick up on really cool sounds and wish I could capture them,” he explains. “This was about the time when cassette recorders were being replaced by digital recorders. They had tiny LED or LCD screens I couldn’t see. But, thanks to technology, I was soon able to use my phone’s built-in screen reader to audio navigate through it.”

As he put more time and effort into these recordings, he received invitations to exhibit and design sound installations across the country—and even around the world. It was during this time he decided to investigate a master’s degree to solidify his career options.

“I saw the opportunities in front of me,” he explains. “Virtual reality game sound, sound design for film, and even ethnographical studies. I wanted a degree that would encourage professional development.”

During the program, he studied spatial audio and sound for extended and virtual reality with a goal of learning to use technology and sound to make games more accessible for consumers. He also landed an internship at Fair Worlds, an immersive agency that focuses on virtual, augmented, and extended reality. After graduating, he was hired by Fair Worlds to do sound design and accessibility work on a project basis.

“I was thrilled to end up working in my field right after grad school. One of the things I’m working on is a project called Space Time Adventure Tour,” he explains. “It’s a tour of the Seattle Center grounds, which was the site of the Seattle World’s Fair in 1962, and the innovations happening at that time. From there, it turns into a dramatic, multi-dimensional game where you’re sent on a mission to free a group of scientists who’ve been trapped since 1962. I’m working on audio and spatial audio, making sure the app is accessible for everyone—including those who are deaf or blind.”

Over the past two years, he’s also spoken about and presented selections of recent sound-based works as a guest artist, lecturer, and workshop leader.

During the past several months, Slater has been consulting on accessibility as well. One of his most recent projects involves showing a museum how to help blind people navigate their spaces. “That has become a big part of what I do,” he says. “This type of work informs my practice. It’s been very valuable to see other artists, institutions, and galleries become interested in making their work accessible to any kind of disability.”

Recently, he was also named a recipient of two fellowships: the Leonardo CripTech Incubator Fellowship and the United States Artists Fellowship.

Through the Leonardo CripTech Incubator Fellowship, he’s working with Thoughtworks Arts to develop “Unseen Sound,” an augmented reality design tool app to support blind and non-visual users in the creation of spatial audio design. This art-and-technology fellowship is centered on disability innovation, creating a platform for artists to engage and remake creative technologies through the lens of accessibility.

The United States Artists Fellowship honors his work as a blind artist and advocate who’s shaping the extended and virtual reality industry to be more accessible. “This fellowship has not only helped me and my family financially, but also helped wipe away any kind of imposter syndrome. It’s validation that other people think my work is worthwhile. It’s a turning point. I feel more comfortable and confident.” With this unrestricted award, he hopes to finish sound projects that were put on the back burner due to time and money.

Another exciting project on Slater’s list this year is scoring a documentary. “Hopefully, the film will be out in the fall,” he says. “I look forward to doing more work like that. It’s one of the reasons I earned my graduate degree at Northwestern. The Sound Arts and Industries program helped me find my confidence. It helped me—and everyone in my cohort—realize that we’re truly artists.”