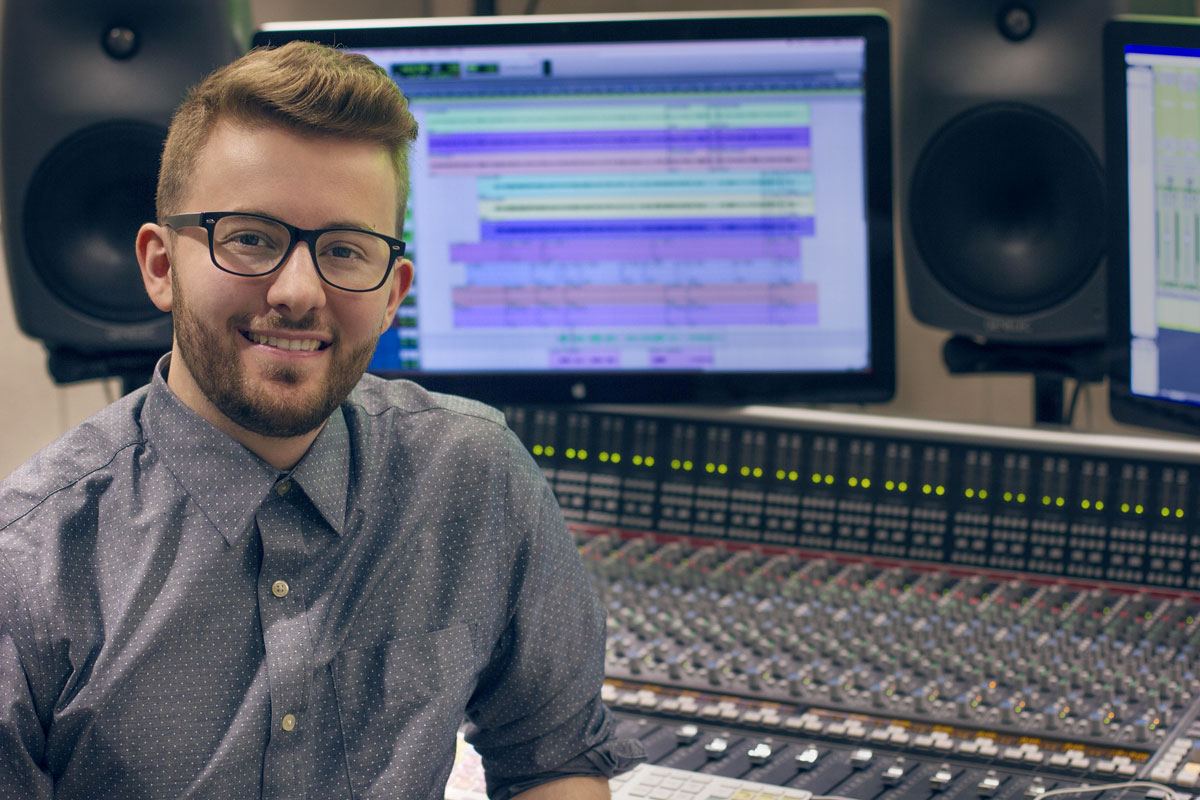 After completing coursework in the MA in Sound Arts and Industries program this year, Andrew Peterson is spending his summer in Los Angeles. He’s applying the skills he developed at two internships with Atlantic Records and 4th Street Recording Studio.

“My main interest in sound is songwriting, plus engineering and producing,” Peterson says. “I took a lot of classes aimed at that – sound production classes and a [production] seminar class.”

Peterson’s interest in sound and desire to work in the music industry developed while he was pursuing a degree in digital film production at Grand Canyon University in Phoenix.

“Junior or senior year, I decided I wanted to do music,” Peterson says. “I didn’t think I could just apply to jobs with a film degree.”

Not wanting to spend two or three years earning a master’s degree, Peterson decided Northwestern’s program was a good fit.

“When I found Northwestern’s program in my home state – a one-year program for exactly what I wanted to do – it was perfect,” Peterson says.

Northwestern’s credibility has helped him land his summer internships.

“[The program] was really helpful in getting the jobs,” Peterson says. “Northwestern is obviously well-known.”

Atlantic Records was founded in 1947 by Ahmet Ertegun and Herb Abramson, who were both huge music fans and record enthusiasts. The label is home to legendary artists Aretha Franklin, Led Zeppelin, Ray Charles, The Rolling Stones and Cher.

“At Atlantic Records, I really like seeing how the industry works from the label perspective,” Peterson says. “I work 50 feet from Kevin Weaver, who has a big hand in developing the careers of people like Ed Sheeran and Bruno Mars.”

Every day, Peterson is surrounded by decision-makers.

“They’re listening to tracks and talking about who they should get on it and the best way to market that song, or trying to find music and get music to artists for an upcoming movie,” Peterson says. “It’s really cool to be around those kinds of people and people who sign artists.”

Peterson’s role at the company involves pitches. He listens to music and sends emails to music supervisors for film and television. He’s also responsible for staying on top of new music and remixes.

Because Peterson’s interests include songwriting, production and engineering, he thought a second internship at a recording studio would help supplement the industry exposure he gets at Atlantic Records.

“It gives me the chance to meet people on both sides,” he says. “The record label for the corporate side and the recording studio for the production side.”

“I like that at 4th Street I get to learn the production side of things,” Peterson says. “It’s interesting to see how the process works.”

Thanks to his experience in the classroom, Peterson feels comfortable and confident in the work he does at 4th Street.

“I took a bunch of classes that gave me an opportunity to practice all of the things I wanted to get better at,” Peterson says. “[4th Street] has been a pretty good extension of Northwestern.”

In his internship role at the studio, Peterson uses the gear he practiced using in school and gets feedback from professionals.

“I practice doing everything myself and now that I’m out here, I can see my way compared to others working in the industry.”

Despite being busy with two internships, Peterson says he has enjoyed his time living on the west coast.

“I like the weather,” he says laughing. “It’s one of the reasons I came out here. It’s cool to live by the ocean. The culture of [LA] feels a lot different from Chicago.”

Ultimately, Peterson’s focus is on the future and positioning himself to find a job once his internships are over in August.