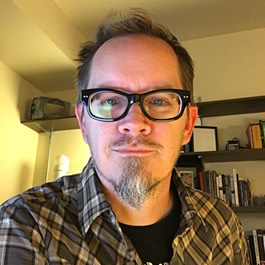 Clayton Brown is a Senior Lecturer in the Department of Radio/TV/Film. He is a documentary and narrative filmmaker interested in exploring the hidden stories and compelling characters that emerge when people pursue their passions. Of particular interest are the ways in which science and storytelling intersect, both in fiction and non-fiction. His fiction work includes Galileo’s Grave, winner of the Chicago IFP Production Fund, and Subterranea, a narrative feature shot on 60,000 feet of intermediate film stock obtained for $900 from ebay. He is a co-founder of 137 Films, a Chicago-based documentary production company committed to telling stories found in the world of science, and co-director of The Atom Smashers, an award-winning documentary about the search for the Higgs boson that was broadcast on Independent Lens and is in international distribution. Currently, Clayton is co-directing a documentary about the 1989 announcement of Cold Fusion and at work on a screenplay about the first woman to photograph a solar eclipse in Montana, 1869.