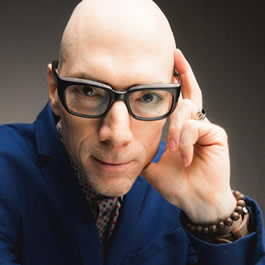 David Tolchinsky is the Co-Founder and Director of Northwestern’s MFA program in Writing for the Screen and Stage and Professor and Chair of the Department of Radio/Television/Film. His credits as a screenwriter include Sony Tristar’s Girl and screenplay commissions from such companies as MGM, USA Networks, Disney, Ivan Reitman’s Montecito Pictures, Edward R. Pressman Film Corporation, and Addis-Wechsler/Industry Entertainment, with many other projects in development. His work spans teen culture, mental illness, and psychological horror. He has a secondary interest in sound design and has designed the sound for interactive computer environments and video installations that have been exhibited internationally. In 2003 he was nominated for two Motion Picture Sound Editors Guild Golden Reel Awards for his sound design for Debra Tolchinsky’s Dolly and Lucky. In 2008 he was named a Charles Deering McCormick Professor of Teaching Excellence. In 2011 he coproduced Debra Tolchinsky’s feature documentary Fast Talk. Also with Debra Tolchinsky he has cocurated The Horror Show at New York City’s Dorsky Gallery Curatorial Programs, Shimon Attie: The Neighbor Next Door at Northwestern’s Block Museum, and The Presence of Absence, sponsored by the Contemporary Arts Council at Chicago’s Hairpin Arts Center. His reflective humor piece about Spalding Gray, “Where’s the Rest of Me?,” was recently published in Paraphilia magazine. More recently, Tolchinsky was included on the NewCity Film Magazine’s 2013 list of Chicago’s top 50 players in film, was the recipient of a $15,000 2014 Illinois Arts Council Artist Fellowship in Literature, and was nominated for Best Play and was named Best Director at the 2015 Riant Theatre Strawberry One-Act Festival, Hudson Guild Theatre, New York City. Tolchinsky holds a BA from Yale University and an MFA from the University of Southern California.